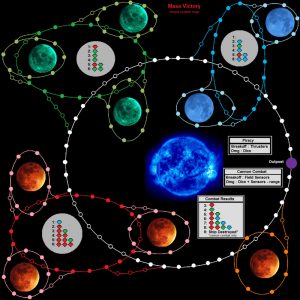 The Worldship game board

I’ve been working on a board game since the spring of 2010 which I originally called “Mass Victory.”  (Now renamed to “The Worldship”)  It started as a collaboration between myself and my daughter – based upon a discussion we had about how mass affected acceleration in space.  She was so excited about it that she stayed up late and built a gameboard model of the solar system, along with a few pink cardboard ships.  She was just 9 years old at the time.

When fleshing out the game I had the following goals:

Players would play Spaceships in my game, I decided, and very versatile ships at that.  Each player would select one of several spaceship “characters” which had different properties, and asymmetrical advantages which would influence play.  Some ships were fast and small, some slow and heavy – some could survive passing through a black hole!  Some got weaker as they moved towards victory, but most got stronger.  But all ships had the same basic set of attributes:  Thrusters, Mining Robots, Cannons, Field Sensors, and Cargo.

THRUSTERS is the number of extra spaces you may move up to while flying through space.  Because of gravitational effects, you don’t always want to fly as far as possible, so thrusters give you some much-needed versatility.

MINING ROBOTS is simply the number of six-sided dice you roll when your ship mines for minerals, or steals minerals from adjacent ships (piracy)  This generally starts at one, and goes up.

CANNONS is the number of dice you roll when firing your cannons.  It also increases your ability to aim Mass Packets.

FIELD SENSORS is the maximum number of cards you may keep in your hand.  It also aids your ability to hit in combat.

CARGO is the maximum number of minerals (of each type) you may hold on your ship.

One of the most interesting and unique elements of the game is that the game can be won cooperatively, by an individual, or by a group of players – depending on how the game develops. All players rely on “The Worldship” to carry them away from the system at the end of the game, so a certain number of repairs need to be made. If the group can repair all 8 systems, then everyone wins! If the group can’t even repair 4 systems by the time limit, then everyone loses. If the final result is somewhere in-between, then the weakest ship gets left behind. So there are lots of interesting choices to be made about upgrading your own ship vs. helping to provide repairs to The Worldship. It’s a really interesting & fun mechanic – we hope you agree!